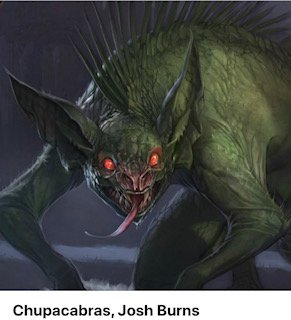 The elusive, frightening, and confusing Chupacabra….one creature that I have been chasing for years. This blog will be in two parts. Part one will deal with information on the South American and Puerto Rico creature, and the differences between that description of the Puerto Rican creature and the Texas Chupacabra, the Texas Blue Dogs, and canids with mange. The second part will focus more on my search for this elusive creature.

It wasn’t until the 1990’s when large numbers of animals were being slaughtered by a mysterious creature that put two fangs into the neck of the hapless victim and apparently sucked the blood from these animals. Since the reports were generally about goats being killed, the name, El Chupacabra became a frightening echoing call across the farmlands of Puerto Rico. The name means, Chupar “to suck” and cabra “goat”, so “the goat sucker”. Goats were the first victims of this creature, but soon hundreds of chickens and other smaller stock were being slaughtered at record rate. It was not until August 1995, when Madelyne Tolentino was driving down a dirt road toward her home in Canovanas, when she confronted a very bad dream in the middle of the road. She said she saw a bipedal, three-foot tall creature with large black eyes, three bony fingers on each hand, three webbed toes on each foot, very long arms, large dangerous teeth, and it had a ridge of large, sharp spines running down its’ back. It moved in a weird hoping fashion, unlike any of the native animals. It wasn’t long before others began seeing this odd creature, and as usual with eyewitness descriptions, the shape, size, color and other characteristics changed, and some even saw wings on the its’ back, as well, but the slaughter of animals continued. 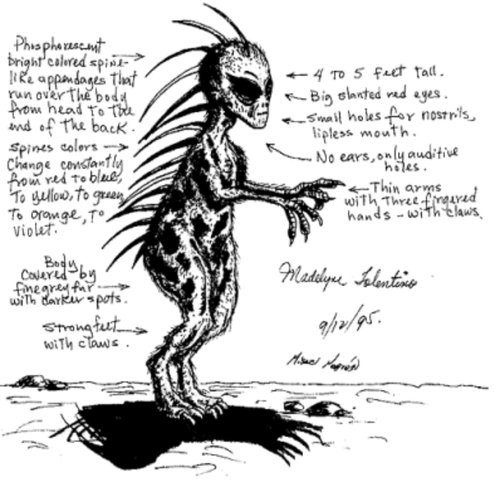 Drawing by Ms. Tolentino of what she saw.

Within 12 months of 1995, the Chupacabra moved on into Mexico, then Brazil and Chile, and eventually into the Philippines and Russia in the early 2000’s. The descriptions were somewhat similar, but then they began showing up in Texas in 2004, they had a totally different shape and description. One wonderful book of an in-depth search for this creature in Puerto Rico, is Nick Redferns’ book, “Chupacabra Road Trip,” which follows Redfern through Puerto Rico and all of the adventures that ensued. One interesting theory about what these, now world-wide blood-sucking creatures are, is one of the things Redfern delves into in his book, “the secret lab in the jungle.” On the Island of Isla de los monos or also known as Cayo Santiago, a small island just off the coast of Puerto Rico, a group of Rhesus monkeys were shipped there to be used in medical experimentation at a base located there in the 1930’s. Over the years, the base closed, and many of the monkeys escaped and in this perfect location, their populations grew. There are over 1,000 monkeys living there now, many escaping from the island. Redfern feels that some of the sightings may have been misidentified Rhesus monkeys from the island. They do have similar size, are bipedal with long arms and big teeth, but they do not suck blood from other animals or answer other questions about this elusive animal.

There are many other creative ideas of what this creature could be. Since there were occasionally UFO sightings near an area where an attack would take place, some believe that the Chupacabra is an alien that may have been left behind. Puerto Rico has its’ own Roswell crash site at a place near Canovanas in 1957, where the first witness saw the creature; and then another near El Yunque in 1984, where NASA, the U.S. Airforce and the CIA reportedly showed up to pick up body parts of these aliens and took them to the base on Roosevelt Road, then off to Florida. Among the many theories of what these creatures may be, some people believe that these creatures are spirts, an evil creature brought forth through black magic rituals; and some think it is a misidentified Bigfoot; but those found in Texas are certainly flesh and blood animals.

In 2004, Texas began having sightings of odd canids the size of a medium sized dog, with an elongated muzzle, longer than natural canine teeth, odd ears, and most interestingly, no hair. The lack of hair, heat and sunlight had turned the thick skin of these canids a dark bluish color, thus the name the Texas Blue Dogs. These animals have very little resemblance to the bipedal, long armed creature with spikes down its’ back found in Puerto Rico, so I believe that there is either two forms of the Chupacabra, or two totally independently different animals. I believe the latter and that the Texas Blue Dog is a much better description of the creature seen in the United States, although many continue to call them Chupacabra’s. The link below is to a short video of an officer in Texas chasing a Blue Dog in their car down a dirt road and of Dr. Phyllis Canyon in 2005 in Cuero, Texas. She had many of her chickens slaughtered and had seen these animals on her property often. She was told of a dead animal along a road which she collected, and had the DNA evaluated, and later had it mounted. This specimens’ DNA was found to be coyote on the mothers’ side, and Mexican Wolf, on the fathers’ side, so it was a hybrid, but that does not explain the lack of fur.

The majority of the animals that have been found and thought to be a Chupacabra are domestic dogs, coyotes, foxes, or racoons that have a horrible infestation of sarcoptic mange. This is a small mite that gets under the skin and makes the skin leathery and the hair falls out. When I was the Cruelty Officer for the Humane Society, I saw many dogs with this condition, two suffered with it so badly that the skin had thickened to the point that they looked like they had a horn between their ears. This is a very sad state for wild animals, especially in cold climates, as it spells death. Hair loss to this degree also makes a familiar animal look entirely unfamiliar and frightening without their fur, as the bear in this photo. 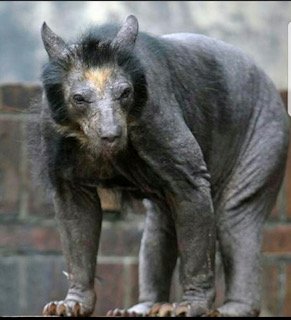 Mexico has a native dog, the Xoloitzcuintli, or Xolo for short, that looks very much like the Texas Blue Dogs. It is better known as the Mexican hairless dog, which the Aztec worshipped over 3500 years ago for their fierce look and loyalty. They are named after the terrifying Aztec god of fire and lightening, Xolotl. These beautiful dogs have developed a thick, tough skin with a blueish color due to being hairless, and they come in three sizes, small, medium and large. Although they may resemble a medium sized Texas Blue Dog, the ones that have been found in Cuero, Texas did not have this DNA. What if a Xolo bred with a Mexican Wolf…..just a thought. 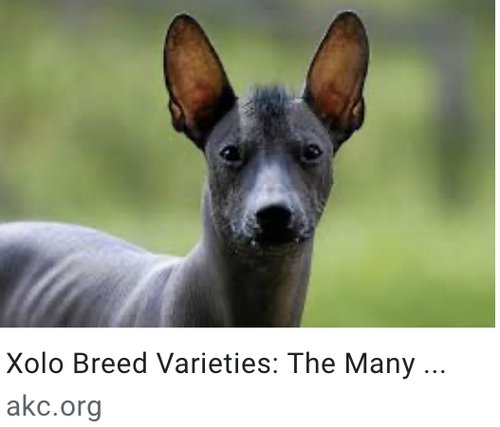 Chupacabra - Part 2, tomorrow will be more local and cover some of my research on these cryptid creatures, the Chupacabra.

Gerhard, Ken and Redfern, Nick, “Monsters of Texas,” The Centre of Fortean Zoology.

Coleman, Loren and Clark, Jerome, “ Cryptozoology A to Z: The Encyclopedia of Loch Monsters, Sasquatch, Chupacabra’s, and Other Authentic Mysteries of Nature,” Fireside, New York, 1999.