Cryptids of Kansas - The Beaman Monster 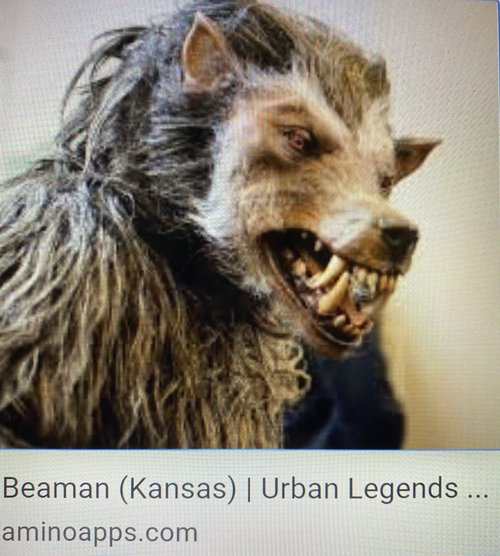 Cryptids of Kansas – The Beaman Monster:

Kansas City has its share of unusual things: scary winged flying creatures; terrifying black eyed children (a later post); those odd folks in dark alleys that stare at you (don’t ask); and apparently, a very ugly and odd monster of its own, the Beaman Monster. This would be a creature that could give anyone a few nightmares if you should chance upon it in the woods or countryside around Kansas City. I may be stretching our area a bit, but Kansas City does not have a wall between Missouri and Kansas, so I am counting it in Kansas and there are accounts of it being spotted on both sides of the border.

Apparently, long ago in 1904, the circus, with their clowns, high wire acts, trained animals, cotton candy and laughter; which gave so many small towns welcome relief from the drudgery of the normal daily life, was traveling through Kansas. The circus was loaded on a train that was chugging its way through Kansas City with many crates and cages housing their scary lions, tigers and bears display animals, as well as trained elephants and other animals all hoping to awe children and audiences alike. As the train was traveling through Kansas City, there was a problem along the train tracks, and unfortunately many of the cars and cages containing the circus animals were violently tossed aground when the train derailed in a cacophony or roars, growls, whines and tweets. Many of the animals were injured and several more escaped the confines of their cages. The majority of the animals that escaped after the derailment were caught and contained, but one escaped to never be seen again….or maybe not.

The story goes that when the train derailed, one of the most feared and prized creatures, a “12-foot Gorilla,” was one of the animals that escaped. Legend also states that this Gorilla apparently became amorous and somehow mated with a wolf, and the Beaman Monster is the result of this unholy matchup. It is described as a huge, hairy beast with the head of a wolf, the body of a gorilla, but is bipedal. This terrifying creature has been sighted killing stock and leaving very large tracks, with a stride too far apart for the normal human stride. Some describe it as a wolf-bigfoot hybrid, or sometimes just a large coyote or wolf. There are those who say the wolfish face is terrifyingly too human.

Russell Holman, from Sedalia tells the story of the train wreck to Fandom, “Russell Holman, 81-year old native of Sedalia, said that the legend of the Beaman Monster can be traced back to the 1900’s. His father had told him a circus train got wrecked in the year 1904. Several animals used in the circus shows were aboard. During the train crash, a 12-foot tall gorilla had escaped. Many people believe that the Beaman Monster was really the offspring of the escaped gorilla.” This story, seemingly the crux of the legend, seems faulty in many respects. There are no 12-foot gorillas, as they are generally around 5.2 to 5.6 foot tall; and they are not totally bipedal; and they cannot mate with a wolf….but why ruin a lovely legend?

Mr. Holman also related to Fandom, that one of his uncles told him about a hunt in the late 1950’s, “by people carrying all sorts of shotguns, to catch the Beaman Monster,” and that they seemed to like to revive the Beaman Monster story every 50 years. He further discussed how frustrated parents would try to keep their wayward children in line by telling them about this bogeyman. “Holman said. ‘Dad said when the boys would get out of hand, they’d call out the Beaman Monster if you didn’t behave. I never did see anything.” Big monsters in the woods that will get you is a good way to scare children into compliance, I assume. The monster under the bed or in the closet comes to mind, but I digress.

Daemon Smith, now 29, recalls a terrifying experience when he was 10-years old. He was with his uncles in their pickup truck, driving down a country road when a large wolfish beast burst from the woods and began chasing and lunging at the sides of the truck. He states, “I’ve seen what my uncles told me was the Beaman Legend. I haven’t heard anyone speak of it since I was little. It wasn’t quite animalistic. It is hard to explain unless you’ve seen it.” He further spoke of later finding a mauled pig that had no tracks of normal animals around it, and saw a shadowy figure lurking in the woods. He continues to believe in the Beamon Monster though, “I think something does exist that is unexplainable.”

Steve Mallard also recalls an incident when he was 12, when he and a friend were digging worms behind his friend’s barn near Smithton on an early spring morning. They planned to go fishing later that morning and wanted a big mess of worms. Since it was early morning, the dew was still glistening on the grass. They saw a spot in the dew where it, “looked like a deer or something had laid down.” Then they noticed footprints in the dew. “There were these huge footprints. We followed them down to the pond and just got spooked. They were big, we couldn’t stride that far apart.” Mallard remembers this incident vividly, and after gaining education in Native American lore, he truly believes that the Beaman Monster could certainly exist. He states, “I get made fun of for it all of the time, but I know what I saw that morning, and I’ll never forget it.”

Many believe that the 1950’s hunt for the monster was a joke, something to have fun with and scare folks, but to others this interesting creature may still exist. There have not been any reports of any recent sightings of it for years, which has spurred the belief that if this creature was a gorilla, or even the gorilla’s offspring, that the life expectancy of a gorilla or offspring has long expired, and that it might have died in the woods. Some believe it could be a misidentified Bigfoot, maybe a dogman, or other misidentified animal, but if the Beaman Monster should still live in those woods around Kansas City, it might be good to pay attention to your surroundings.

The Mercury, “Off the Beat: The Colorful Cryptids of Kansas.” Savannah Rattanavong, October 6, 2019.

Only in Your State, “4 Strange Creatures and Cryptids that Have Been Spotted in Kansas Throughout History.” Clarisa, October 25, 2019.

I was contacted by Michael Priesendorf indicating that the story above of the Beaman Monster was not accurate in location since he was one of the original witnesses. Just goes to show, you can’t trust sources sometimes, although I believe the Kansas City incident was just called the Beaman Monster with no correlation to the actual Beaman Monster of Missouri. I have Mr. Priesendorf’s permission to share his experience.

Just read your article on the Beaman monster and it was not very accurate inthe location Givin. The sight of the train derailment was Beaman Missouri not kansas. In 1972 my older brother, me and two of his friends were night fishing on a creek just south and east of Beaman about two miles. We'd walked down the KATY railroad tracks along side the creek for some distance across the tracks from an old rock quarry. Sometime later, maybe 1 or 2 in the night we saw and heard cattle on the other side of the creek mooing and bawling in the moonlight and a few ran into the creek. We all stood up, freaked totally out and then saw this two legged thing running towards us. We backed up the Rocky embankment of the tracks as fast as we could and tore off down the tracks. I remember hearing it climbing up the rocks behind us but where it went i don't know as it didn't chase after us thank goodness. We went back the next morning and found our fishing gear all over the place. No tracks because it was all rock. Take it for what it's worth. I was there, my brother and his friends have all passed, I'm the last to tell the story.

I responded to Mr. Priesendorf and indicated that I would make these changes and asked his permission to put his story on this post. He gave permission and responded.

Yes, that would be fine. A foot note to the incident is I mentioned the Rock quarry to the south of the tracks. A friend of ours father owned it or the land adjacent to it. His name was Logan and lived catty-corned from us on Harvey st. In Sedalia. We often squirrel and deer hunted this property. On the property there was a concrete structure about 12'x20' with an old iron door that was just kind of rusted ajar. I remember being told it was a dynamite bunker for the quarry years past. Once, I went inside and found a huge pile of limbs and leaves in one end of the bunker and didn't really put two and two together back then, knowing what I heard about these ?creatures? Nesting or what ever, well who knows? Feel free to use this info if you like. It was 50 something years ago, dang I suddenly feel a little old.

If I can be of any further help let me know. Thanks

I want to thank Mr. Priesendorf for his correction on my story and all of the marvelous information about what happened to him and his friends on that frightening night. I am saddened that his brother and friends are not able to add to the story anymore and wish him the very best in the future.