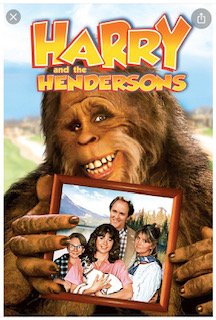 If you are familiar with the movie, “Harry and the Henderson’s,” you are familiar with the huge, awkward but sweet Bigfoot the Henderson family found in the woods, and took home with them; as well as the adventures that came along when folks tried to catch him. This is a wonderfully fun and heartfelt movie, but not at all the reality in Bigfootdom. There are many ideas about what a Bigfoot is, from somehow being connected to UFO’s; an interdimensional being; the Ancient Ones; Spiritual beings; to real, flesh and blood animals. Indigenous peoples from all around the world have legends and beliefs in some form of large, hairy humanlike creatures that live in the woods. There are many TV shows, groups, and organizations that are dedicated to tracking and trying to find this elusive creature, as well as many books covering the subject. So with that glut of information out there, I am going to only touch on some of the history and information available; to give an overview of some of the theories of what Bigfoot could be; as well as reports and other evidence as proof, that such a creature lives here in Kansas.

Bigfoot, or a representative creature, has been around for as long as recorded history, and are known by many names, depending on the country. In Russia these large hairy humanoids are called the Almas; East Africa the Agogwe; Scotland the Big Greyman; Japan the Hibagon; Philippines the Kapre; China, Russia and Tibet the Yeti: India the Mande Burung; Brazil the Mapinquari; Sumatra and Indonesia the Orang Pendak; Australia the Yowie; Canada and North West United States the Sasquatch; and so on in countries all over the world. Here in the United States, they have specific names by region, such as Momo in Missouri; Lake Worth Monster in Texas; Booger in the South; Skunk Ape in Florida; Wildman in Tennessee; Beast of Bennington in Vermont; Fouke Monster in Arkansas, and on and on. The Native American tribes have always had a long-standing relationship with these creatures under various names by each tribe, such as Atahsaia for the Zuni; Nalusa falaya for the Choctaw; Rugaru with the Ojibway; and Skookum for the NW tribes. 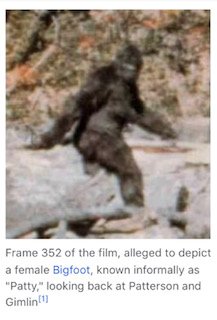 The name of ‘Sasquatch” came about when J.W. Burns, who had been researching these creatures, put several Indian names together to create the term ‘Sasquatch’ in 1929. The term “Bigfoot” is relatively a new term for this creature. It came about in 1958, when Jerry Crew was finding huge footprints in the mud around his construction site in Del Norte County, California. He made casts of these footprints and in a story in the local newspaper, the reporter, Andrew Genzoli, called it a “big footed animal” or “Bigfoot” due to the size of the tracks. These tracks can be very large, over 15 inches in general, the largest was 27 inches in length. In general, Bigfoot is a tall, sometimes reported at over 10-feet tall, but the height is dependent on region. They are taller in the Northwest and shorter in the central part of the country. They have long hair that is dark in color, often with a reddish tint and are thought to turn white with age. They are very muscular, with a barrel chest and arms that reach down toward the knees. They are often known for a very foul smell when they are around. The gait has been researched from the famous Patterson and Gimlin film (https://www.opb.org/news/article/bigfoot-patterson-gimlin-sasquatch/) taken in Bluff Creek, California in 1967. This video has been inspected ad infinitum and is believed to be of an actual female bigfoot that is lovingly called “Patty.” Dr. Jeff Meldrum did extensive research on the gait and has found that no human can move with this same motion. 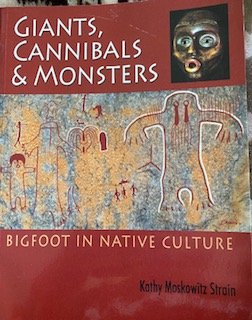 Kathy Moskowitz Strain, Founder of the Alliance of Bigfoot Researchers and author of the book, “Giants, Cannibals & Monsters: Bigfoot in Native Culture,”, writes about the Cherokee and Comanche tribes located in Kansas and Oklahoma with a frightening view of Bigfoot. “In the Comanche traditional language (in the Uto-Aztecan stock), a bigfoot-like creature has two names, ‘Mu pitz’ and ‘Piamupits’, both which means ‘cannibal monster’.” It is a huge, hair covered, foul smelling cannibal that still supposedly roams Oklahoma. Other tribes see bigfoot as benevolent or as spiritual beings; or as the Keepers, Watchers, Wise Ones and other names; but are always respected and sometimes feared.

Bigfoot behavior is particularly fascinating. I know several people who have had long standing relationships with individuals or groups of these creatures. They often bring gifts, play tricks on people, are curious, but for the most part seem to be gentle creatures that want to remain isolated. These are very special relationships that I truly respect. On the other hand, those who go out searching for them; find them very elusive, and very territorial. They can be very vocal, have a language (check out the 1972 California Sierra Nevada tapes below), but may shake trees, throw rocks and try to frighten intruders away from their territory, very much like gorilla behavior. Others may have experiences with them banging on the walls, peering into windows, or taking chickens or stock. Generally, they are thought to eat deer and other small game, as well as berries and some vegetation. It is possible that as some other animals do, they may use infrasound (low decibel sound below our ability to consciously hear) as a form of intimidation or fear. Tigers use infrasound to freeze their prey in place. The infrasound vocalization is a very deep guttural sound that we are not consciously aware of, and may be the cause of all of those goosebumps when we are in scary places.

After many years of bigfoot “hunting”, and research, many types of “proof” have been found for those who want to prove their existence. As I have noted, the ‘Patterson/Gimlin’ film is one of the bases of proof, but there are hundreds of videos and photos (mostly blurred), showing some type of large creature. We have footprints. Dr. Meldrum has the largest group of casts of these footprints at the Idaho State University. Some of the casts are so well preserved that one can see the print swirls on the feet and the midtarsal break. (The foot structure is much different than ours due to the weight being carried.) I have several casts, one left by “Patty” from the Patterson/ Gimlin film, as well as a handprint, as the creature got up out of a muddy area. Hair samples have been collected and found to not match any other living animal, but is primate in origin. Audio recordings also have been researched and found that no other animal on earth makes these types of howling sounds or vocalizations. (The BFRO site has many vocalizations. Link below.) There are also thousands of sightings of these creatures, not only in the United states, but around the world. 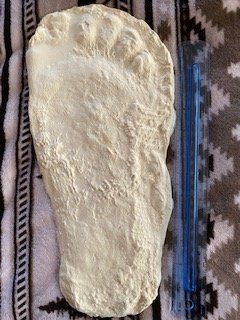 Cast from "Patty" in the Patterson-Gimlin film. 12 in ruler next to it.

Native tribes believe that these creatures are spiritual in nature. Others feel they are flesh and blood creatures, and yet others believe that there is some connection to UFO’s or portals, making them interdimensional. The Skinwalker Ranch is a good example of these interdimensional theories. Portals have been reported to appear on the ranch and bigfoot-like creatures have been seen exiting these portals. Also, in numerous occasions, bigfoot sightings seem to be connected to UFO sightings in the same area and around the same time. In a few of these sightings, the bigfoot creature was taken aboard the UFO. Overall, we do not know what these creatures are or how they got here, but from the start of written history, they have been part of a connection with humans all around the world. Our world is much richer for their presence.

Part 2 of this blog on Bigfoot will cover reports in Kansas, some of my experiences and insights on these elusive creatures. Stay tuned!!

Only in Your State, “4 Strange Creatures and Cryptids that Have Been Spotted in Kansas Throughout History.” Clarisa, October 25, 2019.