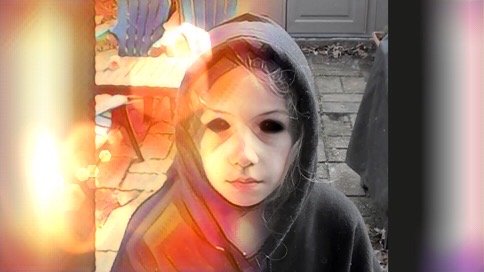 This is a group of creatures that could be listed as a cryptid, folk lore, legend, a paranormal event or just a horrible bad dream. These are only little kids, right? Just little kids who are generally aged six to sixteen or so, that want you to open your door, or go with you in the car, or just be with you…..but seem to make you feel something is terribly off and there are no whites, or any color to their eyes……only blackness.

This is a terrifying story about these little black-eyed children in Kansas posted in Fandom: Creepypasta, “Black-Eyed Kids in Kansas.” “It was warm for a December afternoon in Hutchinson, Kan., when Katie came home from work in 2008. Katie’s ride dropped her off across from her duplex, and as she stood in the street, her ride moving slowly away, she knew something wasn’t right.

“I noticed two boys standing in my driveway,” she said. “One had longer dark hair and the other had his hood up so I couldn’t see him very well.”

The teenagers, about 15 or 16 years old, seemed to be watching her – Katie felt they were waiting for her. She steeled herself and walked nervously across the road toward her porch. The boys had lurked around her neighborhood for months, but they’d never been so bold as to stand this close to her home.

“I had seen them before, lingering in the yard, but they always left before I got out of my ride’s car,” Katie said. “I had seen them late at night as well standing across the street when I would go outside to have an occasional late-night cigarette.”

But, although pangs of unease told her to run, their boldness angered her. She stopped and asked them why they were on her property.

“They told me they needed to use a phone and that the neighbors would not let them in,” she said. “That was when I noticed their eyes – they were coal black. Just black. No white and not even a hint of iris or pupil.”

Fear shot through her, but as evenly as she could, Katie told them she didn’t have a telephone. Katie walked up her porch steps and began to unlock her door when the boy in the hood spoke.

“He asked if they could come in for a glass of water,” she said. “I turned to look at them again thinking maybe my mind was playing tricks. But no, when I turned and looked into their eyes they were pitch black as the first time.”

These children with dead, black eyes had spoken softly to her, emotion and vocal inflection absent from their words. As she looked at these boys, whose long hair and hooded sweatshirts she felt hid more than skin, she knew she had to get away.

“I felt panicked and fearful but also very vulnerable and cold,” she said. “It was like I wanted to let them in but I knew there was evil present. I had felt uneasy before seeing their eyes but now it all came out.”

Then one boy said something that turned her fear into complete terror.

“The hooded one then told me they couldn't come in unless I told them it was OK and that they hoped I would because they were thirsty,” Katie said. “I opened my door and darted inside. At this point I shut the door and locked it.”

She dropped onto the couch, her breaths coming in short, heavy gasps, when something tapped on the window behind her head.

“One of the boys stood there staring through the glass,” Katie said. “I remember his words very clearly; ‘just let us in, miss. We aren’t dangerous, we don’t have anything to hurt you with.’ I was beyond frightened at this point.”

Katie jumped off the couch and ran through the duplex, checking doors and windows to make sure they were locked.

“I did wonder if they really couldn't come in unless invited but I didn't want to find out,” she said. “I sat in the living room silently waiting for a sign that they had gone.”

When her boyfriend came home a short time later, the black-eyed teens were still at the house.

“(He) asked if I knew who the two boys outside were and I said ‘no,’” Katie said. “He told me they had been standing in the driveway when he pulled up but walked away when he stepped out of the car.”

He didn’t notice the boys’ eyes, but “they gave him a strange feeling.”

Katie later asked her neighbors if the black-eyed children had asked to use their telephone like they had claimed. The neighbors noticed the teens standing in Katie’s driveway, but never spoke with them.

Although it’s been more than a year since Katie turned the black-eyed children from her door, she knows they’re still around.

“I still see them every now and then standing across the street, watching,” she said. “But they have not approached me again.”

The legend of Black-Eyed Children or Kids (BEK) has been around since the 1980’s, but got it’s start when a blogger, Brian Bethel had an encounter with two of these “children” in Abilene, Texas in 1996. He said that he also knew of another individual who has had an encounter with these “children” in Portland, Oregon around the same time. Bethel said that he was going to pay a bill at a shopping center between nine thirty and ten o’clock after work. He intended to drop a check into the after-hours payment box. As he was writing the check, he heard a knock on his car window. There were two boys standing there between ten and fourteen years old. The first boy had a darker complexion and brown hair and the second had very pale skin and orangish hair. He didn’t think anything was wrong until, “…right before I experience something strange, there is a change in perception that comes about….It’s basically enough time to know it is too late.” He sensed panic, unease and confusion, and then he noticed that the childrens eyes were solid black. He cracked his window down a couple inches and they told him that they wanted “to see a movie, but they left their money at home. They requested Brian to ‘help them out’ by taking them to retrieve the cash.” They smiled at him oddly and became more insistent that he help them and continued to request assistance. "C’mon mister. Now, we just want to go to our house and we are just two little kids.” Then more forcefully, “C’mon mister. Let us in. We can’t get in your car until you let us you know. Just let us in and we will be gone before you know it.” This is when he again noticed the eyes, “They were coal black, -no pupil. No Iris -s-just two staring orbs reflecting the red and white light of the marquee.” He then took off driving and left the two boys behind. He anxiously looked in his rearview mirror and found that they had disappeared as quickly as they had appeared.

In the Facebook group, Friends and Readers of Phantoms and Monsters, by Lon Strickler, there is an interesting report of a run-in with the black-eyed children in a mall! I guess we aren’t safe anywhere!!

"This happened about 10-12 years ago and I'm not sure if was the real thing. When I was about 10 or 11 I went to the mall with my mom and we went into Sears near my home in Kansas. We were headed towards the main part of the mall and we passed a lady. I remember she had a baby stroller, and two kids following her. One boy and one girl. They looked a few years younger than me, the boy probably 8 and the girl looked about 6. I distinctly remember these kids having fully black eyes and pale veiny skin. I felt kind of guilty looking at them because I thought they had a condition, so I looked away.

I never forgot about those kids, and I would think about it time to time until recently I looked up their condition. I searched pictures, websites, and different key words to try to find a disease or something. Nothing. Earlier today it clicked with me that what I witnessed could have been paranormal. I'd known about black eyed children for a few years but never put two and two together.

This raised so many questions than answers for me. Why were they following her if they were BEKs? What happened to that lady? I wonder if what I saw is truly paranormal, but I don't think I would want an answer." EL 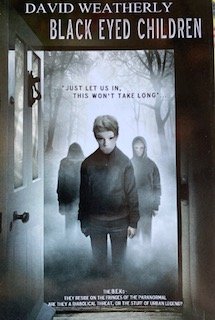 No one knows what this phenomenon is, but David Weatherly in his book, “Black Eyed Children” looks at various theories. He goes through a variety of ideas covering the supernatural to legends to alien human hybrids. He covers ideas of them being phantoms, dark angels, changlings, thought forms, Djinns, and energy thieves. But with this book covering many theories, we still do not know what they may be. He writes about a Sheriff’s Deputy account in Kansas City in 2003. Around 2 am he had received a domestic disturbance call, which had quieted down by the time he got there, but he noticed a couple of young people standing on a porch a few doors down from the call. The porch light was on and he was concerned about the children being out so late at night. He tried to speak to them, but they wouldn’t answer. He went up to the porch since the two boys were just standing there silently. He found that they were in old clothes, possibly homemade. He asked them again if they were alright and one finally said, “We want to go inside.” in an odd accent. He then asked if the noise had awakened them and the one boy said, “They won’t let us inside.” He noticed their black voids of eyes and started getting a very disturbing feeling about these children. Their behavior was off. He knocked on the door and an elderly lady who had obviously been awakened by the officer came to the door. He asked he if she knew the children, turned around and the children had disappeared. He searched the area but could not find them.

Black-eyed Kids are generally, age six to sixteen, with pale skin, wearing generally too large and old clothing, often in hoodies, and are somewhat thin. They can be either male or female children, but either has coal black eyes. They tend to ask to get a ride or come into your house late at night. They may ask for food, a ride, money, or some form of assistance and get somewhat forceful about you assisting them. The common emotion that people have is not the normal compassion people have for children in need, but rather a dread and uneasiness….something is wrong. So if there is a knock on your door in the middle of the night and there are a couple kids standing there silently and oddly, don’t look into their eyes. Shut the door. What if they get inside?

Phantoms and Monsters, "Black-Eyed Kids: What are They?"