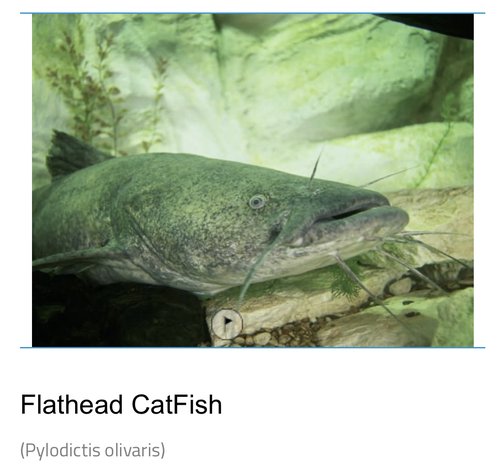 If you go to most any small town community gathering center where the old timers sit around and drink their morning coffee, you may hear a story of this sort from the old fishermen there. It goes like this. “I heard that Ol’ Joe was going to do some night fishin’ down by the big dam the other day, but the next mornin’ all they found was his boat floatin’ upside down. Ol’ Joe couldn’t be found anywhere and since the old guy hadn’t popped up yet, they sent in those diver fellas to go find ‘em. I hear those diver fellas came straight up out of that water, all bugged-eyed and scared. They said that while they were down there by the dam, when the water cleared a bit, their lights showed up some big ole’ fish about the size of a school bus, some of ‘em could eat a feller whole!” There usually is no further word about Ol’ Joes whereabouts, but as these stories may be common….could they actually be true?

In Kansas, we have two fish that can be very large, the Blue Catfish (Ictalurus furcatus), and the Flathead Catfish (Pylodictis olivaris), also the Paddlefish (Polyodon spathula), which has a record of 144 lbs., but it does not have the mouth nor disposition to swallow anyone. On August 11, 2012, Robert Stanley caught a huge Blue Catfish in the Missouri River that weighed 102.8 lbs; Ken Paulie of Chaney caught a record Flathead Catfish weighing 123 lbs, in the Elk City Reservoir on May 14, 1998, but neither of these record fish would be able to swallow a human. So where do these stories of monster fish come from?

Snopes.com, in their article about “Giant Catfish”, says that in the 1950’s many of these stories began with huge shadows that go over divers while they are in the depths of the water; by the 60’s the fish become the size of Ford Falcons (that is a car for you younger folks), in the 70’s they have grown to the size of Buicks, and now they are as large as busses, so it seems to be a factor of each decade trying to outdo the previous decade in tall tales. A suspect 1914 Tennessee photo shows a huge catfish of over 500 lbs., but it was found out later that its’ actual weight was 85 lbs. It seems there was some camera ‘slight of hand’ going on there. A “fish” story.

There are huge catfish in the world though, the largest caught was a rare Mekong Giant Catfish (Pangasianodon gigas), which is found in Southeast Asia and adjacent China, but now feared greatly endangered. This monster fish weighted in at 646 lbs., was 9 ft. long and truly was probably big enough to eat a child easily. One story back in 1902 in Alton Illinois, was about Kato “Mudcat” Mudger who tried to catch a huge catfish in the Mississippi River that his great grandpa Red had had a close encounter with previously. He had thrown his line out for the last time that day and hooked into something big. He fought it while the beast pulled him upriver, moving toward the dam at Alton. The Coast Guard saw him struggling and came to help in the fight, and after a day and night of enormous give and take; fourteen men and a crane finally pulled in the very pooped catfish onto the shore. This beast weighed a whopping 736 lbs. and was thought to be around 170 years old. It later died and when they cut it open to check the stomach contents, they unfortunately found a size 37 boot in the stomach which may have belonged to a Robert Wadlow, who had disappeared and wore that size, or possibly it was the missing Ol’ Joe. The fish was identified as a Mekong Giant Catfish (below), with no explanation of how it got into this part of the world. 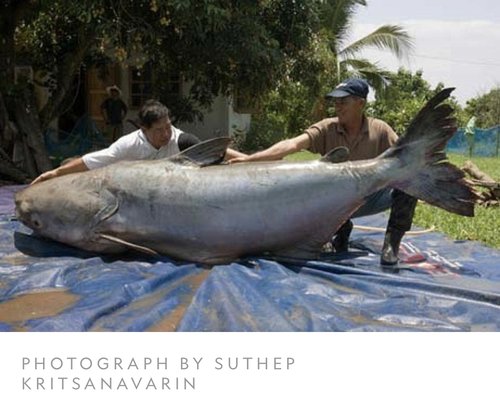 Other monster catfish in the world are the Redtail Catfish (Phractocephalus hemioliopterus) around 123 lbs. of the Amazon; the Wels Catfish (Silurus glanis) of Europe and the United Kingdom that can get up to 660 lbs.; the Piraiba Catfish (Brachyplatstoma filamenstosum), 440 lbs, of the Amazon River Basin; and the Goonch Catfish (Bagarius yarrelli) at over 200 lbs. of the Kali River in India. If you have ever watched the show “River Monsters” with Jeromy Wade, you may have seen him catch and release these amazing monsters.

But the question still is, can a monster catfish get so big as to eat a person in Kansas, or any other State? Well, that question is still unanswered because the truth is that catfish never stop growing, growth slows as they mature, but with the right conditions, they will continue to grow and grow. Temperature, food supply, water flow all can assist in making a monster. So like in the Wolf Creek Nuclear Plants cooling lake, where it stays warm and the food is plentiful, or in other huge lakes where they aren’t bothered…..who knows. I just wouldn’t go diving near any dams, especially if your name is Joe. 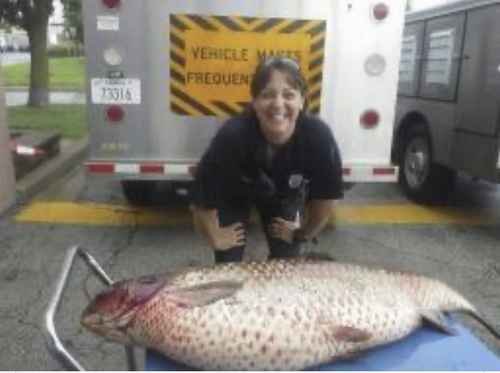 If you have ever had your worms on a hook at the end of your pole that is dangling in the river, you know that you could catch anything. One of the Kansas fish that has amazing survival needs and will give you a real fight is the bottom feeding sucker fish, the carp. Even a small carp will give you the fight of your life. I have even had my finger cut by my line when a carp took off with my worm, so when I read this story about this Carpzilla, I was thinking about what a fight this creature would have given an angler when on their line. Here it the story of this amazing find in Olathe, KS.

The man estimated the fish at more than four feet (1.22 meters) - and he was not telling a whopper, said Schmidt, who responded to the call in suburban Kansas City. The carp lay dead in a roadside ditch that connects to a lake and it apparently swam there when heavy rain caused flooding, she said.

"When the guy said it was four foot, I thought 'Well, most men tell fish stories' and I thought it wasn't going to be even close to that," Schmidt said. "I was very shocked."

Schmidt said the fish measured about 3 ½ feet (1.06 meters) long and weighed 60 pounds (27 kg). It was a grass carp, said Lucas Kowalewski, fisheries biologist for the Kansas Department of Parks, Wildlife and Tourism. The Kansas record for grass carp caught by angling is 77.7 pounds (35 kg), according to department records.

Schmidt said the fish had not decomposed and was lying in shallow water. She put plastic trash bags around the fish to drag it to her vehicle, where she loaded it into a kennel that has a power lift.

Schmidt had her picture taken with the fish, which appears on the Olathe Police Department Facebook page. After the picture, the fish met a quick demise.

"We treated it like any other dead animal," Schmidt said. "We put it into our incinerator."”