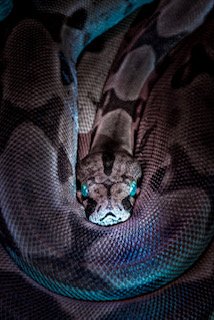 Snakes have always had a shoddy reputation, starting with the Eve and the apple incident. They are long, thin, no legs, a flailing forked tongue, and move in a way that seems to horrify folks, especially when you are walking in the woods and all of a sudden, there is a snake! My dad was a herpetologist and so I grew up with snakes, snake catching and rattle snake milking for their venom, so I guess I have a different point of view of these truly amazing, but feared creatures. They are a necessary part of our habitat and in particular, are necessary to maintain the rat and mouse populations. (Although they have scared the dickens out of folks laying above the door in the chicken coop! Just saying.) I have seen and handled numerous types of snakes, but in Kansas, the largest snakes would range only around 10 feet in the wild. So, could there be giant snakes over 30 feet long slithering around in Kansas? 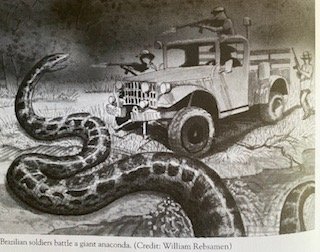 In South America, Asia and Burma, there are snakes that can grow to huge size, as well as stories of monstrous man-eating snakes. In those areas, they do have extremely large snakes, specifically the green anaconda, common boa, reticulated python, Burmese python, rock python and the amethystine python. The reticulated python is the largest of these monster snakes. In 1912, a specimen was reportedly killed that had a length of 32 ft. and 9 in. on the island of Celebes. In 1944, an anaconda was reportedly killed with a length of 37 ft. and 5 in., but there was no proof as the supposed dead snake revived and slithered off. There were many reports of even larger snakes by explorers over the years, such as Percy Fawcett who reportedly killed a 62-foot anaconda on the Rio Negro in 1907 and then looked into another of an astounding length of 80-feet in the same year. From a helicopter in 1959, Remy Van Lierde photographed a huge snake in the Congo of around 40-50 ft; February 1969, a monster 100-foot specimen anaconda was searched for by an Italian zoologist; and in Peru, August 1997, there were reports of a terrifying 130-foot serpent destroying a native village. These snakes of this size thankfully are not found in the United States, and especially Kansas. Thank you.

North America officially has no snakes larger than 10-feet, although there are stories of many snakes seen or killed of huge size. In Newton’s, “Hidden Animals” book, he states that, “Author Chad Arment lists 211 American encounters with snakes 10-40 ft. long reported between 1715 and 1960. In 88 of those cases, the snakes were supposedly captured or killed, but none was preserved.” Among some of these records are giant rattlesnakes, such as 20-footer found in Harlan County, Kentucky in 1857; an 18-foot specimen from Eufala, Oklahoma in 1877; and a 20-ft rattler at Anderson, Indiana in 1897. Other odd snakes have surfaced across the United States over the years, as well. Among these reports is the 1872, killing of a 20 ft. 3 in. snake in Loudonville, Ohio; in 1878 an unknown greenish snake was killed near Antioch, California; and in 1911, a 20-foot mahogany colored snake with grey and gold stripes was killed near Cascade, Montana. These reports all seem to be a long time in the past and there are no more recent reports that I could find.

Herpetologists have determined that due to the length and weight of these huge snakes, they would not be land living animals, but would be more like the huge anacondas that live in the water which would support their massive weight. In Colemam’s book, “Mysterious America: The Revised Edition,” he unfortunately informs us that the water is not safe here from these huge snakes. He shares stories that there are reports of these giant snakes in “The Drowned Lands” in New York, south of Lake Champlain; Lake Minnetonka, Minnesota where a 30-foot “sea serpent” was seen; a 60-foot monster was seen in Vincennes, Indiana; and in Big Swan Pond, Indiana they had a 20 to 25 foot long snake that kept its head high above water like a water monster, as it swam. 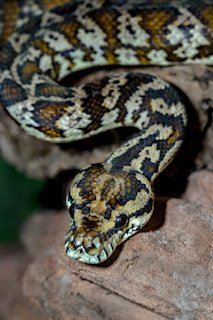 Florida and other southern States have found that people have released giant boas, pythons and anacondas into the wild when they get too large to handle or the food begins to cost too much. This is causing a crisis with the endemic animals in those areas. Many of these snakes are found to have grown to huge size due to the plentiful prey and warm climate. These pet snakes are also released in Kansas, but our extremely cold winters would be too cold for boas, anacondas and pythons to survive, but what if a smart snake found a nice warm barn, cavern or other area to wait out the cold? We have plenty of snakes in Kansas that survive our winters.

I will leave you this report to ponder. The residents of Fredonia, Kansas in 1871, caught a blue-black snake with yellow spots that reportedly measured 37ft, 9 in.! Where could this snake have come from since the pet trade was not in business yet? Apparently, we have had very large snakes in Kansas, but for some, any size of a snake is terrifying. Kansas Native American tribes had many types of snake gods that they worshiped and many of these came from our waters. So, it might be possible, maybe not probable, but possible, that there could be some very large snakes living near our lakes and rivers in Kansas. If you see one, let me know…I’ll listen for the YIKES!