Cryptids of Kansas: Hellhounds, Dogman, Wolfman and Werewolves...Oh My!!!

Posted by Flint Hills Paranormal on May 8, 2020

Cryptids of Kansas: Hellhounds, Dogman, Wolfman, and Werewolves…Oh My!

Linda Godfrey depiction of the Dogman

Linda Godfrey was a newspaper reporter in a small town in Wisconsin in 1991, until at the edge of her town, on Bray Road, several people began seeing a frightening creature eating roadkill, running across the road, or lurking in the bushes. There were so many reports that she wrote a story in the local paper about it, “The Beast of Bray Road,” on December 31, 1991. This beast and her story became a sensation and Ms. Godfrey has since written numerous books filled with eye-witness reports and has become the premier expert on the Dogman/Wolfman/Werewolf experience in the United States. Goes to show how a little monster can help your career!

As one of my favorite authors, I read a chilling report that Linda Godfrey described, of a “Manwolf” sighting in a missile silo in Wichita, Kansas, in her book, “Real Wolfmen: True Encounters in Modern America.” This story goes like this….

In 1973, a 13-year old young man and his friends had a habit of sneaking into an abandoned missile silo that once belonged to the Boeing military works south of Wichita. They had to climb the old silo and go through a trap door to get up on the roof where they were capturing pigeons, trying to train them to become homing pigeons. One bright moonlit night they were heading to the silo when they saw a large, ominous figure up on the roof of the silo. “As the boys crept closer, they saw that the mysterious silhouette was actually a very big dog, which rose onto its hind legs in one smooth, startling move as it heard the boys whispering excitedly.” After the creature growled at them menacingly, they ran off, probably to a troubled nights’ sleep. The boys curiosity peeked the next day and with the bravery of a sunny sky, they returned to the silo and found total pigeon carnage inside of the silo. There were destroyed birds and beaks found everywhere. For very good reasons they never returned to the silo.....wise choice!!

These types of creatures have been reported all around the United States, many in the Wisconsin, Michigan areas, but also in Kentucky, Tennessee and more southern States. Many reports also have come from Kansas. So, what can these creatures be? Are these flesh and blood animals, spiritual beings from another dimension, or just nightmares playing out in our reality? We know that they are not wolves, since true wild wolves have not been in Kansas since the early 1900’s. Hunters did shoot a large coyote, they thought in 2012, but Wildlife and Parks tested the DNA and found that it was a Grey Wolf that had lost its way from a wolf population living in the Great Lakes area.

Throughout time there have been many, many kinds of spiritual dog/dog-man beings that have been important to different cultures; from the Egyptian dogman god Anubis; the Sumerian Goddess Bau; the Norse god Fenrir; the Greek god Kerberos; the Shinto god forms of Kitsune; the Irish shapeshifter Morriganto; the Egyptian god Set; and a plethora of European sightings of Hellhounds, Werewolves, Black Dogs and other shady canids. These are known by numerous names, such as Bogey Beast, Cu Sith, Padfoot, Devil Dogs, Black Hounds, and the Gurt Dog. In America, the Native Americans have a very close relationship with nature, so wolves, coyotes, and foxes played a large part in their rituals and beliefs, like the Hopi God Poco Kachina, the shapeshifter Skinwalkers, and the prankster fox, among others.

The term cynocephaly, or cynocephalus, means having the head of a jackal or dog, or actually “dog headed.” This refers to the human body topped by a dogs head, which has always been important in the legends of Egypt, China and Greece, as noted above. This is different from Lycanthropy, or werewolfism, where an individual believes that they become an actual wolf by using creams, magical potions, or the phase of the moon. There were several famous psychological cases of lycanthropy, especially in the 1500’s, a very bad century where werewolves were running amuck apparently. One of these is the story of Jacques Roulet, “The Werewolf of Angers,” in 1598, who killed and ate many children before he was caught. At his trial he described the cream he used and how he would change into a werewolf to go out to savage young children. He was not promptly executed, but oddly sent to be re-educated for 2 years in religion, due to “which he had forgotten about in his huge poverty”. Today, we still have people who believe that they are werewolves and vampires and they have clubs and probably Facebook pages for these folks, but this is not what is being reported by terrified witnesses. 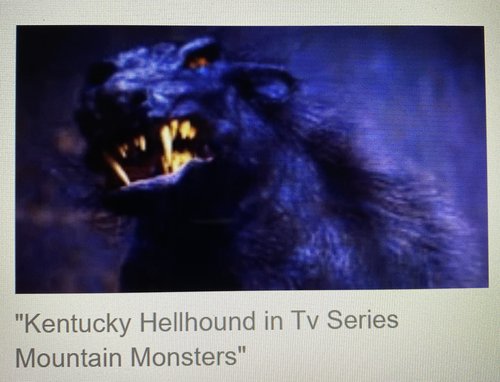 Hellhounds, also known by many names, such as Black Dogs (British Isles), Black Shuck (Norfolk), Barqhest (England), Cwn Annwn (Welsh), Dip (Catalan), or the Kentucky Hellhound. Black Coyotes are not totally out of the question for this critter, as the Kansas City Star reported on 3 rare black coyotes that were killed in a huge coyote shoot in the south and were found to be much larger than normal coyotes, but they do not have the same description as a Hellhound. Hellhounds are generally described as being black in color, around the size of a Great Dane but with greater mass and muscle. They have ominously glowing red or yellow eyes, they leave behind a foul odor, they have super strength and speed, and some can even speak. They are generally found around water or cemeteries and a fog or mist may come up when one is near. Since they are generally seen near a cemetery, they are believed to be the protectors of the dead. It is also believed that if you see one, that they portent death or tragedy. Another belief is that they are sent to destroy an individual who is creating an issue in the dimensional world and they would continue to chase them until their duty is fulfilled, which I would think would not be pleasant. These Hellhounds are viewed as more spiritual beings and are four-legged creatures, and not the bipedal animal as most Dogmen, Wolfmen or Werewolves are described. 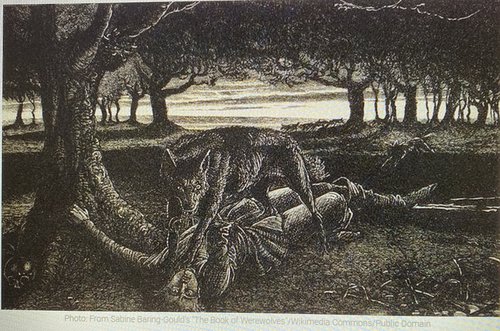 I earlier described Lycanthropy, or a human werewolf, but there may also be a true werewolf creature, albeit possibly human in nature, as well. These are not psychological issues, but more on the spiritual/legendary level. They are known by different names, such as the Lycan, Lobizons, Wulvers, Doggos, the French Loup garou or the Louisiana Rougarou. Many of these creatures are also thought to be individuals who change into a wolf for a variety of reasons. In the movies, the bite of a werewolf dooms one to a couple bad nights once a month when the moon is full. One of the most famous and vicious cases of a werewolf attack happened in an 80 square mile area, between 1764 and 1767 in Gevaudan, France, when a huge wolf-like animal attacked hapless villagers with at least 210 attacks and left behind 113 deaths. The animal, The Beast of Gevaudan, was much larger than a normal wolf and sported a very long tail and was thought to be a werewolf. Since that time, thousands of reports of large wolf-like creatures have attacked livestock, humans or have been sighted by terrified citizens; some of these creatures tend to walk on two legs then fall onto all fours to run, and they certainly do not have the same body shape as a wolf.

The Dogman or Wolfman, that Ms. Godfrey has compiled several volumes of reports about are not, by most accounts, very nice creatures. They are nocturnal, generally with the greatest activity after dusk, and are very aggressive. They don’t seem to have any sense of humor as they utter terrifyingly deep growls when encountered and will charge at you or chase you. They come in all colors, including white, but they are generally a dark color, mainly dark brown or black with a reddish cast to the coat. They range from 5-8 feet in height, with a very muscular upper body and a more human body shape, but with the feet more like a dogs, with the front part elongated, walking on the ball of the foot, and the heel off of the ground. The hands are like elongated paws with sharp claws at the end. They can be a quadruped when running and then stand up and walk as a bipedal animal. The head is more shaped like that of a German Shepard head with very large teeth and they either have a very small tail, or no tail at all. Some believe that they are misidentified Bigfoots, although some researchers believe that there seems to be some possible issue between the two large predators, as they are not generally sighted in the same areas. Many of the sightings occur when they are involved with eating roadkill, chasing prey across a road, or a hunter goes to get the deer he shot and it is being devoured by one of these creatures. Although there are many sightings where the witness has been charged by the Dogman, there are few stories of anyone actually being attacked by one, but I would err on the side of caution.

In Part 2, tomorrow, we will review some actual cases of dogman/wolfman reports in Kansas.

Lynn County - April 8, 2021 In late December, 2020, Paul Porth states that in he had a possible Dogman encounter. He states that he heard a wolf-like howl that had a duration of 10-12 seconds, with a foul smell in the area.