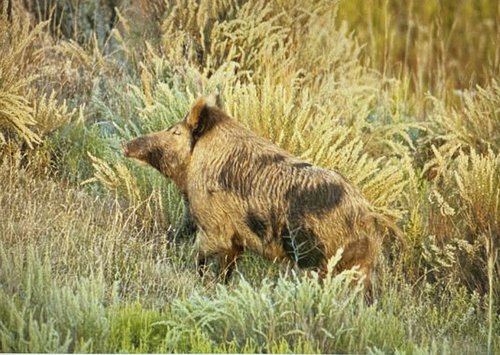 On a nice summer afternoon, you have your fishing pole and bait, and are enjoying your walk along the river bank to your favorite fishing spot when you hear a thunderous crashing through the brush, loud snorting and unbelievably you see a huge, angry, wild looking pig coming toward you, tusks bared. If your instincts are right, you head for the best climbing tree you can find and hope they lose interest in you and move on, while you let your heart rate slow down. This is a story that could happen because, yes, Kansas has feral hogs, Russian Boars, Razorbacks, or they go by many other names, all, Sus scrofa, and none with a good sense of humor. They can knock you down, tusk you, kill you and then eat you if you are tasty! These are not your sweet pot-bellied pigs.

I am not one to carry a weapon, but when I decided to start researching Bigfoot (will discuss in another blog), I was afraid enough of stumbling onto a wild boar in the woods, and I know my tree climbing skills aren’t that good, that I got a pistol big enough to bring one down and not just make it angrier. Luckily, I haven’t had to use it.

Timothy Winter was driving on U.S. 281, just south of Pratt on November 24, 2015, when to his surprise a large feral pig ran out in front of his car and he collided with it, doing much damage to his vehicle. Mr. Winter is not the only Kansan feeling the presence of these feral hogs. Farms in many areas of Kansas have had acres of farmland, river bottom, pens and fencing destroyed by these feral pigs. It is said that it only takes 20 hogs to till up an acre of ground in only 2-3 hours. That means that an entire crop can be destroyed overnight by a group of these hogs. Millions of acres have been destroyed, both row crops and pasture lands because of their rooting in the dirt for grubs and seeds, and the way they make wallow areas to cool off.

Feral hogs are a combination of a variety of wild hogs that were brought to the Americas by the Spanish explorers in the 1500’s. Some of these hogs escaped captivity and began breeding with endemic wild populations, which gives them the feral hog characteristics you see today. Generally, the feral hog coat is a grey/brown with black spots, has longer hair on the body and has a very long snout, and did I mention long tusks. Interestingly, it only takes a domesticated hog that you would see on a farm to revert to the feral hog characteristics in only 2-3 years in the wild. The “wild” genes are dominant in this species.

In Kansas, the feral hogs were first reported in 1993. Feral hogs are the most prolific large mammal on earth, so they can multiply very rapidly. Since a feral hog can breed and have a litter of, up to 6-14 piglets, one and a half times per year, and the size of the “sounder”, “pared”, “drove”, “passel of piglets”, or whatever you wish to call a group of hogs, can be rather large with numerous sows, one can see how they can expand into a real danger for farming and individuals.

Some of the problem with these feral hogs is of our own making. Many years ago, wayward hunters thought it would be a great idea to bring in and release many Russian boars, so they could hunt then right here in Kansas. There are populations of these boars in various areas of the State, such as around Junction City, Bourbon, Kiowa and Morton Counties. I have an article, that I cannot find, from the Emporia Gazette about a hunter in Madison that shot and killed a 400 lb. Russian Boar back in the late 1990’s. That is a very good size for a boar, especially if it were chasing you up a tree. 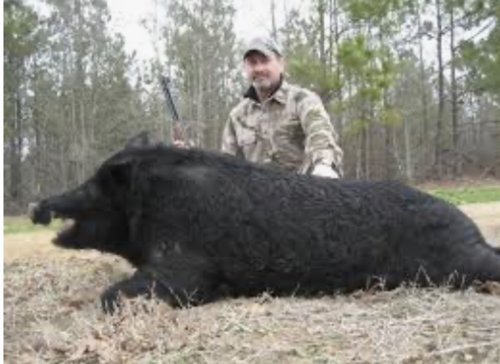 So, yes, we have feral hogs in Kansas, but these are not by any reach of the imagination a Hogzilla. The average size of a wild boar is around 300-400 lbs., and a sow is around 250-300 lbs. which makes them very formidable animals, but not as huge as has been reported in many parts of the country. The largest feral hog was shot in Alapaha, Georgia by Chris Griffin on June 17, 2004. This monster was alleged to have been 12 feet long and weighed over 1,000 lbs. Another huge wild boar was shot in the Mississippi Delta area, weighing in at 650 lbs. What is needed to make these feral hogs grow to these amazing sizes is plentiful amounts of good food and being left alone. It is possible that in Kansas, down on the river in a remote area, there may be a boar with plenty of food, growing into huge size and having dreams of treeing people who bother it.

In 2018, Chambers County, Texas, a lady who was the care giver for an elderly couple didn’t show up for work in the morning, as usual. As she was always very dependable, the couple called and called her on her phone, but could get no response. Since her car was still in the driveway, one of the elderly couple went out onto the front porch to look for her. To their horror they found her lifeless, destroyed body on the ground between the front porch and her car. The Sheriff was sure of what had happened, but they waited for the autopsy to tell them that a group of feral hogs, that had been seen on the property many times, had torn her apart. The terror that lady must have felt when she was cornered by those hogs haunts me.

The tragic story above, did not happen in Kansas and we do not have the number of feral hogs as Texas, but we do have populations of these animals in the State, mainly along the Oklahoma line. (See map) Presently, we have around 1,000 feral hogs in Kansas, although this number has varied greatly by year and the type of hunting restrictions placed on them. Curran Salter is the State official who is tasked with tracking them. But maybe, just maybe, somewhere in a remote area where the food and water are plentiful, or the hogs have found stored feed for cattle or horses, there could be a Hogzilla growing to huge size. I just hope you don’t meet up with one. 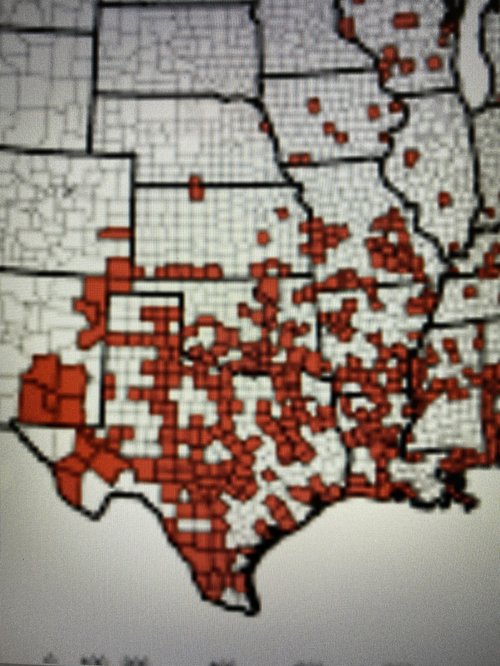 If you see something strange or have any questions, please feel free to contact me at flinthillsparanormal@gmail.comor message me on our Facebook page.

University of Nebraska – Lincoln, “Status of Feral Pigs in Kansas and Nebraska-2006.”