Cryptids of Kansas - Oddities and Alrighty Then: 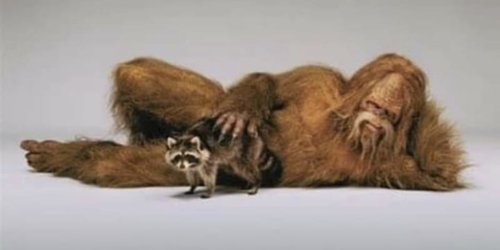 Cryptids of Kansas – Oddities and Alrighty Then: 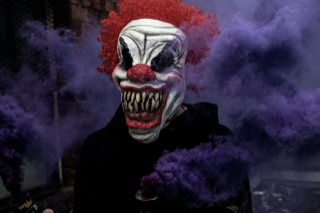 In 1981, there must have been something going on. Either the air was bad, or the planets were aligned wrong, but something was going on. The year 1981 was the year that the Killer Clowns began appearing across the United States. It began in the early Spring in Boston when several children, generally aged five to seven years of age, at elementary schools in various areas of the City, were terrified by what they described as “clowns” in a yellow van that tried to get them to come with them. The terrified children talked to their parents about these clowns, and the school officials put out this warning to the children, “It has been brought to our attention of the police department and the district office that adults dressed like clowns have been bothering children to and from school. Please advise all students that they must stay away from strangers, especially ones dressed as clowns.” These clowns then apparently moved on toward Rhode Island area and then on to Kansas City, where these clowns were sighted, beginning May 22 of that year.

A mother watched a yellow van come up next to her children at 8:30 that morning, as they were starting to walk to school. The van stopped and the children ran away screaming and terrified. They said that an individual dressed like a clown and holding a knife was trying to get them to get into the van with him. A week before it was found that another clown with a knife had terrified students on their way to school in another Kansas town. The police were inundated with calls about the clowns until later in the day on May 22. These “Killer Clowns” had terrified this part of the country to the point that many parents kept their children out of school. One sixth grader from Fairfax Elementary School gave the following report to a Kansas City Star reporter, “He was by the fence and ran down through the big yard when some of the kids ran over there. He ran toward a yellow van. He was dressed in a black shirt with a devil on the front. He had two candy canes down each side of his pants. The pants were black too. I think; I don’t remember much about his face.” Sgt. Jim Treece, with the Kansas City police stated, “We don’t want to panic people, to make them think there’s an Atlanta-type situation here, but today we have the first sighting of this clown that has been verifiable.” Sgt. Treece further remarked about this clown, “The dark haired man was wearing a clown outfit and had a painted face ‘with red polka-dots.’ The Kansas City Star reports that, “ A trickle of sightings on the Kansas side of the river swelled into a flood after the menacing figure was dubbed the “Killer Clown” , and in a memo distributed by a nun at Our Lady and St. Rose School, they said, “There have been reports of a character called Killer Clown jumping out of bushes and threatening children with a knife.” The police were calling this an attempted abduction of these children and seemed to be mainly in Afro-American neighborhoods. These clowns then seemed to move on to Omaha and then on to other cities across the United States.

In June 1981, Pittsburg, Pennsylvania children saw “menacing Clowns” targeting mainly black children, where most other sightings were in white neighborhoods; March 1988, Louisville, Kentucky children were chased by a clown in a red truck; October, 1991 Chicago and surrounding area, a spree of clowns tried to abduct children; 1992, Texas and South Carolina had their experiences with these clowns; 1994 New Jersey had a spree of reports; 1997 New Jersey had 6 reports of clowns; 2008 Chicago again; 2014 Indiana a clown was sighted trying to hand out balloon and then 2016 South Carolina had a wave of sightings; and Kansas in 2016 again had clowns reported.

2016 was again a bumper year for clowns. All across the United States, people dressed like clowns were arrested for chasing people with a bat, knife and other weapons while dressed like clowns. On September 27, a person dressed like a clown was seen creeping in the bushes near the intersection of 85th Street and Parallel Parkway in KC. October 1 in Topeka, a clown was spotted at Southeast 37th and Southeast Adams St and then October 4 children at a bus stop saw a clown with a knife chasing a young lady; and October 4 in Lawrence there were so many clown sighting that a sorority locked down. Clowns were also sighted in Chanute, Pittsburg, and Parsons.

Clowns can give us so much joy like at the circus, and it is wonderful to hear the laughter of children reacting to their antics. We have clown motels and flower or balloon delivery clowns; but clowns have also been depicted as creepy vestiges of such evil, such as Pennywise in Steven King’s book, “It.” In most cases, these are real humans dressed as clowns, but there are many stories of spiritual clowns, or other beings mimicking a benign clown to attack children. Personally, I find them creepy, but obviously there are those who would dress up as clowns to do harm to others, or are some of these clowns that are sighted paranormal entities wanting to do us harm, knowing that we have some form of trust in these silly faces??

Slate.com, “The Wave of Evil Clown Sightings is Nothing to Worry About. It Happens It Happens Every Few Years!,” Matthew Dessem, October 3, 2016. 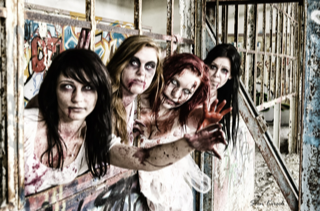 Zombies are those half-rotten, smelly, brain eating folks. We see them in movies and television shows, and they seem to be rather popular, even though they are probably very smelly, but are they real? Do we have them in Kansas, and could we actually have a Zombie Apocalypse???

In the world of Voodoo, the belief in zombies is real and they are real in some sense. Ingesting the poison, tetrodotoxin, of the Puffer Fish (Tetraodontidae), is 1,200 times more poisonous to humans than cyanide. The poison in one Puffer Fish has enough toxin to kill 30 human adults, so it isn’t anything to play with and there isn’t any known antidote. Voodoo priests or others who wish to do harm, have found the right amount of tetrodotoxin to give someone to make their heart rate beat so slowly that they seem dead. They are later revived, maybe even after their funeral, and are basically brain-dead slaves to be used as needed. So, in this sense, they are the stumbling zombies you could imagine from stories. For other cultures, zombies can be the flesh-eating creatures of legend, such as the Aswang in the Phillipine culture. The Aswang also goes by the name the Tik-Tik or the Sok-Sok, due to the noise it is supposed to make when one is in the woods and it is near….so remember that while in the woods.

Since Kansans are always prepared, we are very lucky that in 2014, the Kansas Division of Emergency Management announced that October is Zombie Preparedness Month, with the blessing of the Governor. Knowing that the following things are important if a Zombie Apocalypse should occur, these are a few things you should be prepared for: zombie outbreak containment, home defense if zombies should attack, living off the grid, and the collapse of the economy. My friend Devin Tucking with that department says, “If you are equipped to handle the zombie apocalypse then you’re prepared for tornadoes, severe storms, fire and any other natural disaster Kansas usually faces.” So, I guess we will be ready if this happens, but personally, I am a bit attached to my brains. You might want to check out this little film called, “Zombies Kansas – Death in the Heartland,” made November 30, 2017, but I can’t vouch for its accuracy or quality.

Citylab.com, “Why is Kansas Preparing for a Zombie Apocalypse?”, Clare Foran, September 25 , 2014.

My Patriot Supply.com, “Ready for Anything-Zombies and the Preparedness Journey.”

Well, Cryptids of Kansas has come to its’ ultimate conclusion. Kansas may not be a hotbed of Cryptid lore or sightings, but it certainly has more Cryptids than previously thought. From Fairies to giant creatures to Bigfoot and the Chupacabra, Kansas has, and continues to have, mysteries and mysterious creatures that might be found in our woods, plains, and waterways. From Native American legends of the past to personal sightings of anomalous animals of today, Kansas truly is a treasure trove of interesting and unbelievable mysteries. There are so many other odd phenomenon that has occurred in Kansas, such as a rain of pebbles, a rainbow cloud, a drenching on mud from the skies, balls of light, UFO’s, and of course, my favorite, ghosts. Hmmm, that seems fodder for another blog….Odd Kansas! We will be starting a Paranormal Blog very soon, with research on types of equipment, personal experiences of some of our Team members, investigating techniques, infrasound, and a great deal more. We hope that you have enjoyed the Cryptids of Kansas blog and please join our Facebook or Instagram pages at Flint Hills Paranormal. We are working on our YouTube Channel as well. Please let us know how we can help you understand the oddities and creatures of Kansas.

And remember, if you see something strange or have any questions, please feel free to contact me at flinthillsparanormal@gmail.com or message me on our Facebook page.