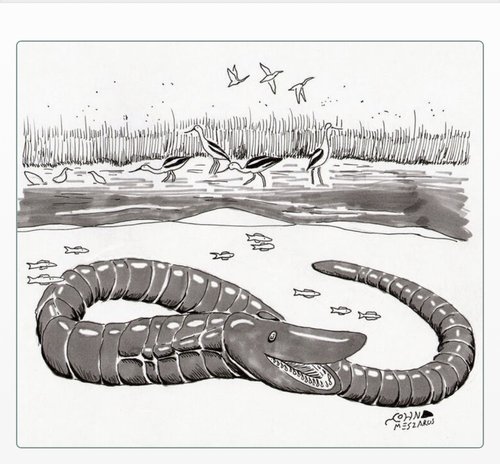 Way back, before 1920, the area around Inman, Kansas, had many freshwater ponds and lakes, but over time, they dried up or were drained, but several of these low areas still held some water. These were called sinkholes. Lake Inman was one of the largest of these lakes and was reported to have a deep sinkhole area with underground caves. Around 70 years ago, two fishermen were innocently fishing (see the pattern) when a 15-foot snake or eel-like creature emerged from the water and swam around, not bothering anyone. The fishermen said that the creature was about as thick around as a tire. Since the creature was odd and not bothering anyone, the fishermen decided to take potshots at it, but missed it entirely. But once people heard about the creature, as Steve Gilliland wrote in his article about Sam, “The story spread like hot peanut butter!” and it became rather famous. There were several sightings of it, but after a period of time, the sightings stopped, and the thought was that the creature had died or became bored with scaring fishermen.

The belief was that Sam (don’t know how they decided it was male) was possibly a prehistoric creature that had lived in one of the caverns under the lake. Ernest Dewey and Dr. Erasmus P. Quattlebaum, a duo of great scientific minds, said that Sam was a “Foopergerkle”, “the most “extinctest” creature to habitat the Kansas Plains”. As Mr. Gilliland wrote, “Their final report urged caution, since Sam did not realize he was extinct.” Always good advice.

The Paranormal Site, in their article about Sam did further investigation into what “he” could be, and gave several suggestions that it could be a Giant Earthworm, as some worms in South Africa can grow to 6 foot lengths (ugh); and other suggestions that “he” could be a Giant Sea Worm, a Giant Eel or a Giant Snake. We will never probably ever know, since it seems Sam has left us unsatisfied.

There is a "Cryptids of the Corn", podcast and recently, they did a podcast on our Sinkhole Sam and Oil Pit Squids in Indiana. Here is the link, if you are interested in this podcast:

Cryptids Of The Corn: Midwest Cryptid Round up! Sinkhole Sam and Oil Pit Squids on Apple Podcasts

“OFF THE BEAT: The Colorful Cryptids of Kansas”, Savannah Rattanavong, October 6, 2019. 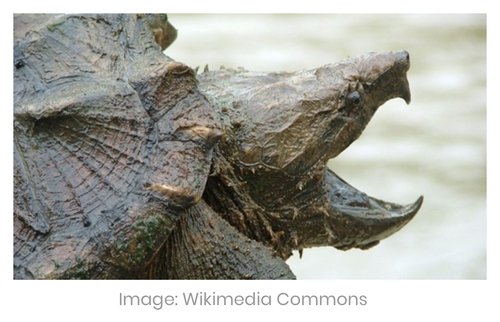 Imagine that you are wading in the creek on a hot summer day, just minding your business, enjoying the cool water on your feet and the birds singing, when something moves in the muddy creek bottom near your feet. It startles you and you run to the creek bank. It could have been a fish, a crawdad, or something that might just give you the willies when you think about how close you might have come to losing a little piggy.

Kansas has myriads of creeks and rivers, all of which contain great fishing, they bring in the beautiful Great Blue Herons, ducks, geese, and other birds, but also can harbor very large turtles. These are mostly benign water turtles, but also, in those waters lurk snapping turtles. Since snapping turtles tend to be bottom dwellers for the most part, lying in wait in the muddy bottoms of the water for a fish or other food source, they are not readily seen unless they are crossing a road or hanging on to a really beauty of a fish you just caught and put on your stringer, which causes spontaneous Tourette’s-like behavior.

In Kansas, there are two species of snapping turtle, the Common Snapping Turtle (Chelydra serpintina), and the Alligator Snapping Turtle (Macrochelys temminckii), or more commonly known as the “Loggerhead Snapper”, or more colorful names. The Common Snapper generally does not get larger than 35 lbs., but it is its much larger cousin the Alligator Snapper that can grow to very large sizes. One of the main differences between the two species is that the Alligator Snapper has three dorsal ridges down the top of the carapace. They also sport a large hooked “beak”, and if you want to get that close, inside the mouth which they hold open, the tongue has a “worm shaped” appendage that wiggles around, luring in unsuspecting fish. They generally are dark colored and covered with algae, looking like small islands that crawl around and bite you. These dears can reach very large sizes, but generally are from 17-179 lbs. on average, are very aggressive and have no sense of humor. One in Kansas is said to have weighed 403 lbs.! They have a bite force of up to 1,000 lbs., so if you see one, especially a big one, just let it do its turtle thing….and don’t run over them in the road. That is just wrong.

In 1937, a fellow was snagging fish in the Neosho River but snagged a huge turtle instead, that unofficially weighed in at 403 lbs. This is considered the State record for Alligator Snapping Turtle size, but a couple guys, Henry and Ralph Stice, were checking their trotlines in the Labette Creek, SW of Oswego, in April, 1938, when they found a huge snapper was tangled in their lines. They pulled it in as far as they could to the shore, but they had to find a friend to help get the monster out of the water and into a waiting truck bed to be taken into town to be weighed and shown off. As reported in the Parsons Sun, June 1938, the turtles’ carapace was 2 ½ feet wide, 4 feet in length, had a head 8 inches across and weighed 132 ½ lbs. In the article, the paper claimed this was the record for Kansas, but I am not sure why the 403 lb. beast wasn’t mentioned. Either way, these were huge turtles, but in the depths of our Kansas rivers and lakes, it is possible that there could be even larger specimens, so keep this in mind the next time you dangle your feet in the water.