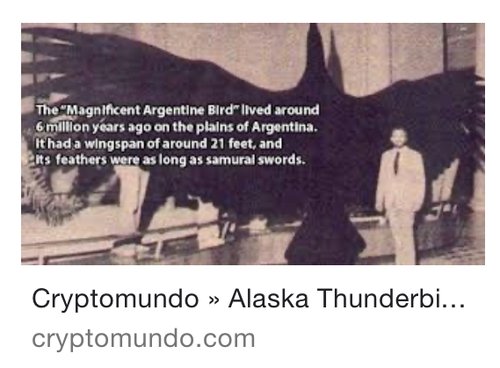 Humans have some innate fears, fears that come from our heritage of early Man and are forged in our DNA. One of these fears is the fear of darkness. Our limited abilities to see in the dark has always kept us in constant danger of the nighttime predators and continues to be a source of all forms of evil, from the boogeyman and dark spirits to those with bad intentions. This innate trait serves us well.

Another of our innate fears is the unknown coming from above. As prey animals we were constantly aware of the possibility of a large dark shape leaping from a tall tree above us or a huge dark shadow swooping down to grab us by the shoulders with long, sharp talons. Early Man had many predators, including Giant Eagles and large flying Pterosaurs, some with huge wingspans….some still apparently seen today.

In more recent times, many huge bird sightings have occurred in several areas of Kansas. December 2019, an individual saw a huge black bird, much larger than a raven, gliding over the tops of the trees in Overland Park, Kansas. In Kansas City, under a full moon on July 4, 2020, a couple individuals sighted an extremely large bird, "It was gigantic...about the size of a Cessna plane and flying about the same altitude." These sightings are not rare, but often go unreported.

As Loren Coleman describes in his book, Cryptozoology from A to Z, “The “Big Bird” that overflew the Rio Grande Valley in January 1976 got its name from the Sesame Street character. Witnesses describe it as, however, less amiable than its TV counterpart. Some called it “horrible looking”. It was at least 5 ft. tall, with wings folded around its body and large red eyes on a “gorilla like” face.” This bat-like creature attacked the witness, tore his clothes and was very unlike our gangly “Big Bird” of TV fame, and sounds more like the Mothman. But those who have seen these huge flying creatures generally characterize them as huge black raptors, like an Eagle, a Thunderbird, or more like the extinct pterosaurs.

Thunderbirds have been part of Native American culture, and were thought to protect humans from evil spirits, maybe by scaring them to death. They are also known as the Rain Bird or Pamola. It is called a Thunderbird because of the sound it makes when it flaps its’ huge wings and they are believed to bring on rain and storms. They are more spiritual birds that lived in the clouds above the tallest mountains and were both feared and respected. This description does not really describe what witnesses of these sightings see though. 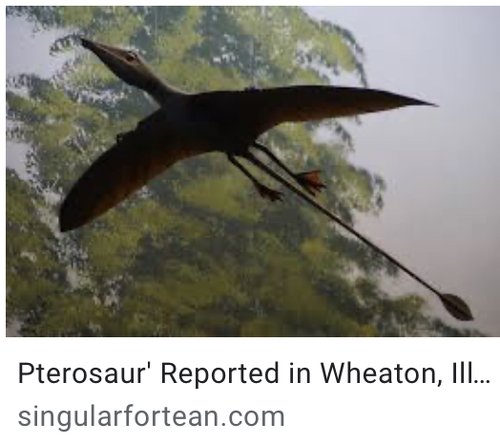 Pterosaurs (Greek for winged lizard) is a group of extinct flying reptiles, a group of which I am glad are no longer around, although people continue to see them. Their size ranged from the size of a sparrow to Hatzegopteryx that had the wingspan of a small airplane, or Quetzalcoatlus that had a 50-foot wingspan and was as tall as a giraffe. These were not birds, but actual reptiles and were the largest vertebrates that were known to fly. They had leather-like wings, a tail, sometimes long like a dragon; some had a crest on their head, with a long bill; some with dinosaur shaped heads with fearsome teet;, some had a furry covering, and some were just absolute horrors to have seen. Pterodactyl is the common term for this large family. They were Kings (and Queens) of the sky during the Jurassic and Cretaceous periods and are thought to have become extinct, but sightings of these creatures endure, even in Kansas.

In Jason Offutt’s book, Chasing American Monsters”, he states the, “sightings of flying reptiles with a wingspan of fifteen to twenty feet have been reported in Kansas over the decades.” One such incident was in Hudson, Kansas, 2012, when a man and his wife were surprised when they saw a “dragon” fly up from the ground at the end of a fence row while they were on a walk one evening.

Johnathan Whitcome has a Live Pterosaur Blog in which he describes several encounters with these flying lizards in Kansas. He has over 1400 sightings across the United States of pterosaurs and more than 14 in Kansas alone. One story was of a, I would imagine terrified, young person playing outside in Garden City, Kansas, in 1994, when they saw above them a 30 foot-long, grey creature, gliding over them. It had no feathers, the tail was triangular at the tip and it sported a long beak.

So keep your eyes to the sky’s folks, because if a huge dark shadow glides over you, you may be able to see a piece of ancient history. Just West of the great birding site, Cheyenne Bottoms, there have been several witnesses who have seen these large, ancient flying lizards. One of our FHP Team said that she saw something strange, that she thought might be a pterosaur, flying parallel to her car in Emporia just last week!

If you see anything strange or have any questions, please contact me at flinthillsparanormal@gmail.com or message me on our Facebook page!

Coleman, Loren and Clark, Jerome, “Cryptozoology A to Z: The Encyclopedia of Loch Monsters, Sasquatch, Chupacabras, and Other Authentic Mysteries of Nature”, Simon and Shuster, 1999.

“Introduction to the Pterosauria: The Flying Reptiles”

“4 Strange Creatures and Cryptids that have Been Spotted in Kansas Throughout History”, Clarisa, October 25, 2019.

In 2018, rural Tonganoxie, Kansas, two witnesses were out enjoying the evening on their farm and saw a very strange yellow/white light in the sky that became larger, closer and moved very quickly across the Kansas sky. If that was not enough, a few days later they saw a Pterosaur-like creature in the evening. They were going to check out the evening sky to see if they could see the bright light again when a very large bird swooped down over their car. As they rightly so feared, they thought it might attack, as it was five to six times the size of their car.

“As it glided overhead the couple noticed that the creature had leathery egg-colored body and jointed wings which were pointed at the back, and that it had a long beak with a cone on the back of it.”

Rural areas in Kansas, especially Eastern and South-East Kansas have a great deal of wooded areas with many rivers and creeks throughout. In these forested areas there are many types of game, both large and small, which a predator, even a very large predator, could find dinner. There are also sheep, goats and young calves in fields that would make a tasty meal, as well. A Pterasaur-type creature might find enough food source in these areas and be able to survive, maybe without being seen often.

Margie Kay reported several residents had a frightening vision when a Pterosaur was sighted in 1974 over Kansas City, Kansas early in the morning. The description certainly sounds like a pterosaur-type bird as it had huge leathery wings with a 15-foot wingspan. The head was very long like a pterosaur. All of the witnesses were silent while watching the large creature fly over until it was gone.....probably with open mouth .

The following is a frightening sighting of a huge Eagle in the small town of Stanley Kansas. It is taken from Margie Kay's book, "Winged Aliens".

“Richard Frieburg lived near 161st and Old Metcalf Road in Stanley Kansas in a new house at the time of this event, which he related to me in August of 2020 (see his other sighting August 4, 2020). One evening he was outside washing his car in the driveway when he suddenly had the thought to look up. He heard no sound but looked up anyway. There, on the peak of the ridge of the roof was a huge eagle which he estimated at eight feet in height. When the eagle saw Richard, it took off and flew away. Richard just stood there and felt no fear or concern about it. Upon looking back at this incident, he finds this behavior very strange. He did not recall having any missing time.”